Love and Royalty: Will and Kate

A mass of people lined the streets leading up to Westminster Abbey where a wedding was to be held. Even if much of the world was also watching, this spectacle really was a moment of historical significance and close to the hearts of the British. It was, after all, to be the wedding of the son of royalty, Prince William, to that of a commoner, Catherine 'Kate' Middleton. 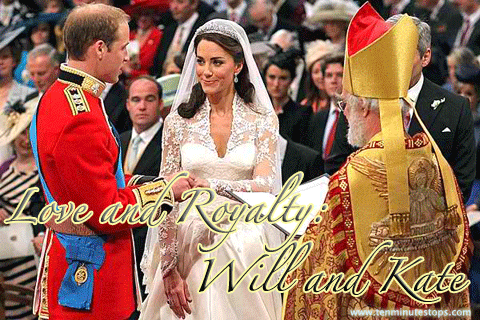 The world's interest in the event owes much to the fact that it was Prince William who was going to be wed, and the world had come to know of him as the son of the princess that the world adored and whose tragic death the world mourned - the late Princess Diana. The British monarchy was seen as an archaic institution, and Princess Diana's inclusion in the family, by virtue of marriage to Prince Charles in 1981, was seen as an infusion of fresh energy to an institution that was teetering on the brink of irrelevance. The British monarchy owes much of its popularity now to having had Princess Diana, even as that marriage between Diana and Charles fizzled and even tainted with much scandal, until eventually resulting in the most saddening death of Princess Diana in 1997.

It has been nearly 14 years since Diana died. Between then and now, the world's interest in the British monarchy consisted only of inquiries into the second marriage of Prince Charles, and the growing years of the brothers Princes William and Harry.

The renewed public absorption in the monarchy now owes to the promising marriage of Prince William to Kate Middleton - esp. as William has always been considered the male version of his mother Princess Diana, and esp. as Kate Middleton is looking very much fit to become a Prince's wife (or a future king's queen), being herself a lovely face. There is nothing like good looking people in royalty that inspires people's fondness for perfection, as in fairy tales.

While the wedding was certainly beautiful, what to me rescued it from being just another empty but high-profile international event - what to me gave it worth my time of actually watching the whole process live on CNN - was the message of the Archbishop of Canterbury Rowan Williams during the marriage ceremony.


I believe, for anyone who listened, that message by the Archbishop put the event in proper context. He made it no different from the weddings that occur around the world, no more important nor no less signficant, no more challenging nor less of a commitment. He put the royal wedding on a par with any other wedding that requires the same effort to help make successful. Absent the trimmings of royalty, the pomp and pageantry, and the illusion of a fairy tale - it was still just about two people in love.

Here is the text of the message given by the Archbishop Rowan Williams during the wedding of William and Catherine, the Prince and Duchess of Cambridge:


"Be who God meant you to be and you will set the world on fire."

So said St Catherine of Siena whose festival day this is. Marriage is intended to be a way in which man and woman help each other to become what God meant each one to be, their deepest and truest selves.

Many are full of fear for the future of today's world but the message of the celebrations in this country and far beyond its shores is the right one – this is a joyful day! It is good that people in every continent are able to share in the celebrations because this is, as every wedding day should be, a day of hope.
In a sense every wedding is a royal wedding with the bride and groom as king and queen of creation, making a new life together so that life can flow through them to the future.

William and Catherine, you have chosen to be married in the sight of a generous God who so loved the world that he gave himself to us in the person of Jesus Christ.

In the Spirit of this generous God, husband and wife are to give themselves to one another.

It is of course hard to wean ourselves away from self-centredness. People can dream of such a thing but the hope will not be fulfilled without a solemn decision that, whatever the difficulties, we are committed to the way of generous love.

You have both made your decision today – "I will" – and by making this new relationship, you have aligned yourselves with what we believe is the way in which life is spiritually evolving, and which will lead to a creative future for the human race.

We stand looking forward to a century which is full of promise and full of peril. Human beings are confronting the question of how to use wisely the power which has been given to us through the discoveries of the last century. We shall not be converted to the promise of the future by more knowledge, but rather by an increase of loving wisdom and reverence, for life, for the earth and for one another.

Marriage should transform, as husband and wife make one another their work of art. This transformation is possible as long as we do not harbour ambitions to reform our partner. There must be no coercion if the Spirit is to flow; each must give the other space and freedom. Chaucer, the London poet, sums it up in a pithy phrase:

As the reality of God has faded from so many lives in the West, there has been a corresponding inflation of expectations that personal relations alone will supply meaning and happiness in life. This is to load our partner with too great a burden. We are all incomplete: we all need the love which is secure, rather than oppressive, and mutual forgiveness, to thrive.

As we move towards our partner in love, following the example of Jesus Christ, the Holy Spirit is quickened within us and can increasingly fill our lives with light. This leads to a family life which offers the best conditions in which the next generation can practise and exchange those gifts which can overcome fear and division and incubate the coming world of the Spirit, whose fruits are love and joy and peace.

I pray that every one present and the many millions watching this ceremony and sharing in your joy today will do everything in their power to support and uphold you in your new life. I pray that God will bless you in the way of life you have chosen, a way which is expressed in the prayer that you have written together in preparation for this day:

God our Father, we thank you for our families;
for the love that we share and for the joy of our marriage.
In the busyness of each day keep our eyes fixed on what is real and important in life
and help us to be generous with our time and love and energy.
Strengthened by our union help us to serve and comfort those who suffer.
We ask this in the Spirit of Jesus Christ. Amen.

Diana: Her True Story in Her Own Words

The Monarchy and the British Nation, 1780 to the Present