Nope, not the motorcycle, but yes, of Japanese-descent like the motorcycle. He is Guy Kawasaki - a Hawaii-born Japanese-descent American who was once notably known as an Apple evangelist. I think he is to be credited also for contributing greatly to making Apple very famous, very cool; and with Apple's rise, his popularity grew as well. If there are now millions of evangelists (if not fanatics) among the many Apple users, they are the making of Kawasaki himself. (or he would be the first among all of them) 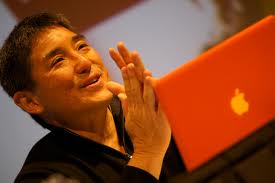 I think before even the venerable Steve Jobs (Hail Steve Jobs!), or the highly regarded Filipino businessman Manny V. Pangilinan became famous or infamous for their memorable (Jobs) or forgettable/plagiarized (MVP) graduation speeches, there was Guy Kawasaki's take on "Hindsights that I've accumulated in the 20 years from where you are to where I am" - a top 10 list he gave graduating students at the Palo Alto High School in 1995. Probably came across that speech way back in 1998, but it's still going around even now in endless succession of email forwarding and social networking. Read it!

I bring up Guy Kawasaki because after he finished his stint as an Apple evangelist, he founded Garage.com (to support and help incubate start-up companies) and had written a book for start-ups called "The Art of the Start: The Time-Tested, Battle-Hardened Guide for Anyone Starting Anything

And if you're starting your own company, you have to have plenty of ammunition to get you through the challenges ahead. The Art of the Start is an important book to read as it contains a great deal of simple, valuable real-world advice for you - the entrepreneur. Being honed in the Silicon Valley, Kawasaki's insights are pretty-much borne of his Silicon Valley experience. If you're dreaming of pitching your own Google or Facebook to Silicon Valley Venture Capitalists (VCs) for some kaching-kaching dollar-infusion, The Art of the Start may well be the How-To in making that happen. His insights are as true in Silicon Valley, as much as in... Marikina Valley.

I have shared the book (among many other books) to all of my business partners so that I don't have to explain to them what it says (hehe), and so that we can all proceed with our business coming from the framework that Kawasaki's book prescribes. In fact, we used it as basis when we were crafting our goals for our companies.


As I had also said in another post, it is really about the kind of value that one adds to other people's lives, to the world! It is not about crafting the most impressive Mission-Vision statements. Kawasaki actually wants us to do away with that because after all, he says, Who even remembers their company's Mission-Vision statements? "Making Meaning" and encapsulating it in a simple Mantra, is about being able to know by heart what ones reason for being is as a company. Simple - so that it is easily understood, better remembered, and easier realized; Close to the heart - so that it fires one up when the times get tough.

Think about it: What meaning does your company want to bring into the world?

Book Recommendations:
The Art of the Start: The Time-Tested, Battle-Hardened Guide for Anyone Starting Anything

Rules For Revolutionaries: The Capitalist Manifesto for Creating and Marketing New Products and Services

Enchantment: The Art of Changing Hearts, Minds, and Actions